The Wildcat Hills: Setting an example for conservation through collaboration

Back in late March, I visited western Nebraska and the Wildcat Hills area. With roughly 97 percent of land in Nebraska fenced off as private property, I was eager to get a taste of the publicly accessible 3 percent. I had the privilege of exploring the area with Grant Reiner, photographer and videographer with the Platte Basin Timelapse project. His firsthand knowledge of the land and its inhabitants elevated the experience.

The Wildcat Hills host a rare mix of prairie and montane meadow plant species, which in turn support varied array of wildlife species. I was amazed at the animals we were able to see, as well as the varying terrain and plants. I expected to be hiking in native tallgrasses, but the speckles of yucca, juniper, and mountain mahogany scattered throughout the hills made me feel as if I were back in northern Arizona at times. At various places along our 8-mile route, Reiner pointed out mule deer, bighorn sheep, wild turkeys, and even a pair of golden eagles (the absolute highlight!). Although we didn’t lay eyes on any mammalian predators, we came across scat that pointed to coyotes, bobcats, and mountain lions in the area. With such an abundance of ecological diversity, I was eager to learn more about the land’s management and conservation initiatives.

Nebraska Game & Parks Commission (NGPC) manages the Wildcat Hills State Recreation Area, which is comprised of 1,094 acres of recreational wilderness, and an additional 230-acre Wildlife Management Area, which allows permitted hunting. As you can see on the map below, the adjacent Bead Mountain Ranch and Murphy Ranch (Platte River Basin Environments and Nature Conservancy properties, respectively) provide even more public access for the avid outdoorsperson. These areas are referred to as the Wildcat Hills Wildlands, and are collaboratively managed. 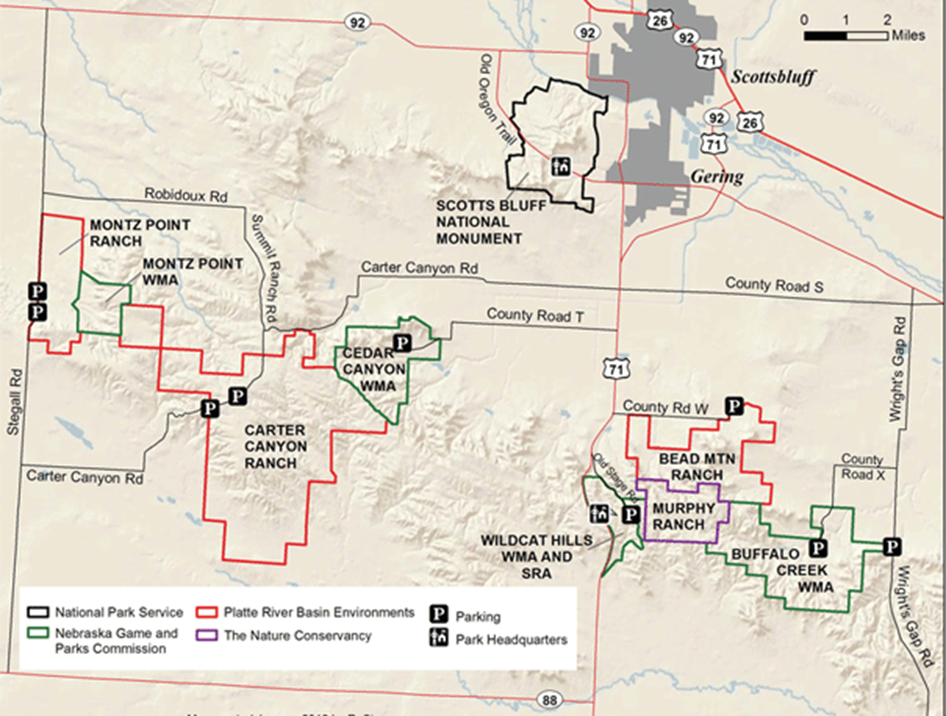 Platte River Basin Environments (PRBE) was the brainchild of a group of sportsmen in western Nebraska with a vision “to conserve the beauty and the many indigenous life forms of the Wildcat Hills Wildlands.” They developed a collaborative process by partnering with Nebraska Game & Parks, The Nature Conservancy, future land-owner partners, conservation organizations, and the public “to maintain, enhance and restore native plant communities and the full diversity of wildlife they support.” Troubled by a degenerative trend in the biodiversity within the landscape over the years, PRBE began working with these partners to acquire lands in the North Platte River basin to conserve and enrich as vital wildlife habitat. To further encourage their protection and stewardship for generations to come, they helped open some 33,000 acres of land (delineated in the map above) for research, education, sporting, and recreational enjoyment. Hiking in the Wildcat Hills, I enjoyed the success of their conservation efforts firsthand.

As the PBRE website states: “All of the areas are truly wild lands, with little human influence other than fencing and windmills. There are no restrooms or other facilities. Access is free and no entry permit is necessary [with the exception of the NGPC SRA & WMA and Scotts Bluff National Monument, both of which charge an entrance fee]. There are few marked trails, other than two-track former ranch roads. Although there are parking areas, vehicles are prohibited. Access is by walking or horseback only.”

With visitation to national parks and public lands across the country increasing at an alarming and unsustainable rate, there is an ever-mounting desire among outdoor enthusiasts for uncrowded and authentic wilderness experiences. My advice to those wanting that kind of adventure? Take a little walk on the wild side and visit the Wildcat Hills of Nebraska. 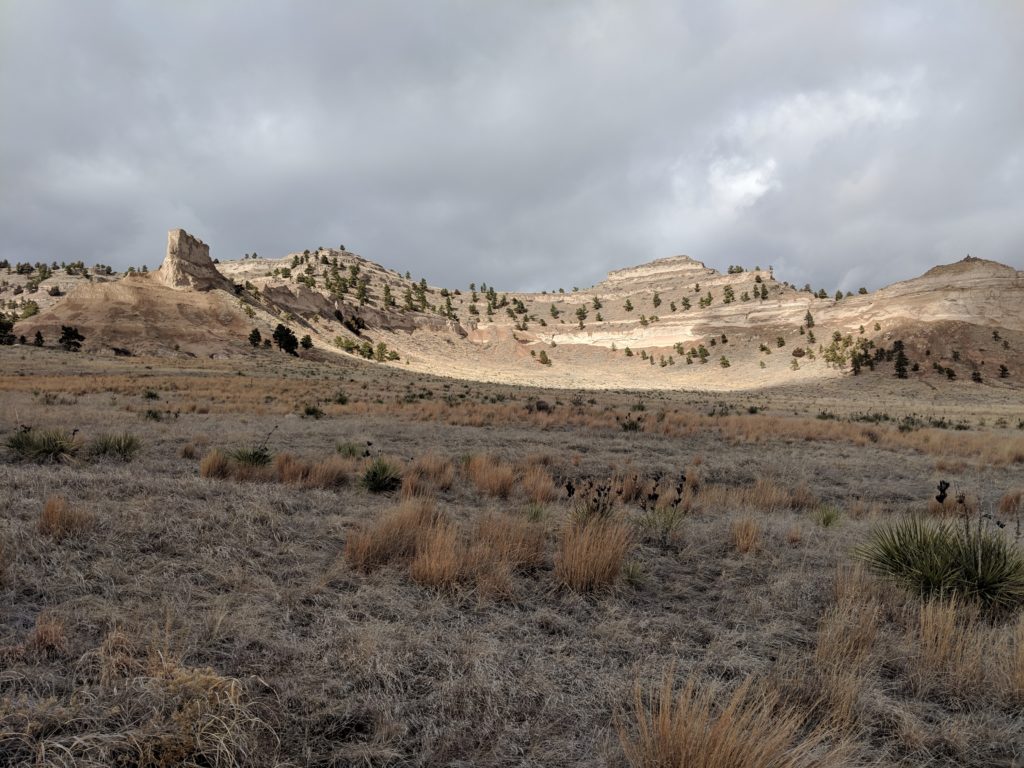 « From the Nebraska Agri/Ecotourism Workshop: Astrotourism
The Place of Literature on the Great Plains; Or, “There never was an is without a where.” »
Committed to promoting environmental conservation through nature-based tourism in the Great Plains.