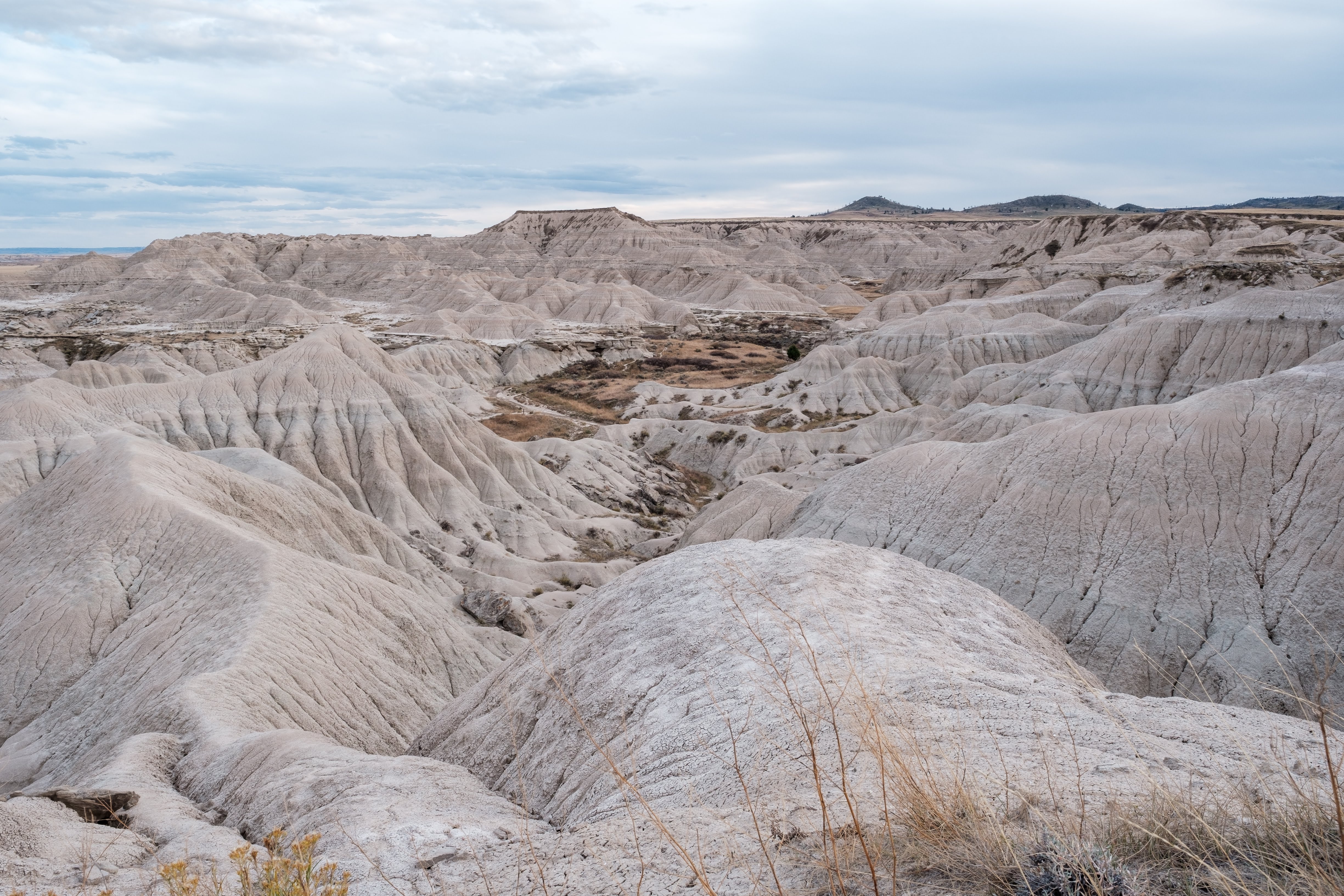 Head west on Highway 2 on an early autumn afternoon, before lunchtime when the sun is just a little too high and bright and static, and the land around your car seems dry and unchanging until suddenly, quietly, everything loosens. The farm and grasslands ripple, becoming duny. The tense daylight itself relaxes into a new kind of motion, ducking here and there, now past Broken Bow, now past Alliance, into the odd geology of clouds, how they seem to play with the dunes. On them, the clouds’ shadows stretch willy-nilly and distorted; the Sandhills’ version of funhouse mirrors for the sky above.

“For all the dust, the land moves so much like water,” I remarked to Emily Rau, a doctoral candidate in the English Department at UNL and the managing editor of the Willa Cather Archive, in the driver’s seat beside me.

As our Great Plains Graduate Fellow Captain, Emily had planned this year’s grad fellows retreat to western Nebraska and South Dakota over Fall Break in October—a trip that would take six of us from three different departments at UNL to some of the most breathtaking, historically complex, and ecologically unique corners of the Great Plains region itself. 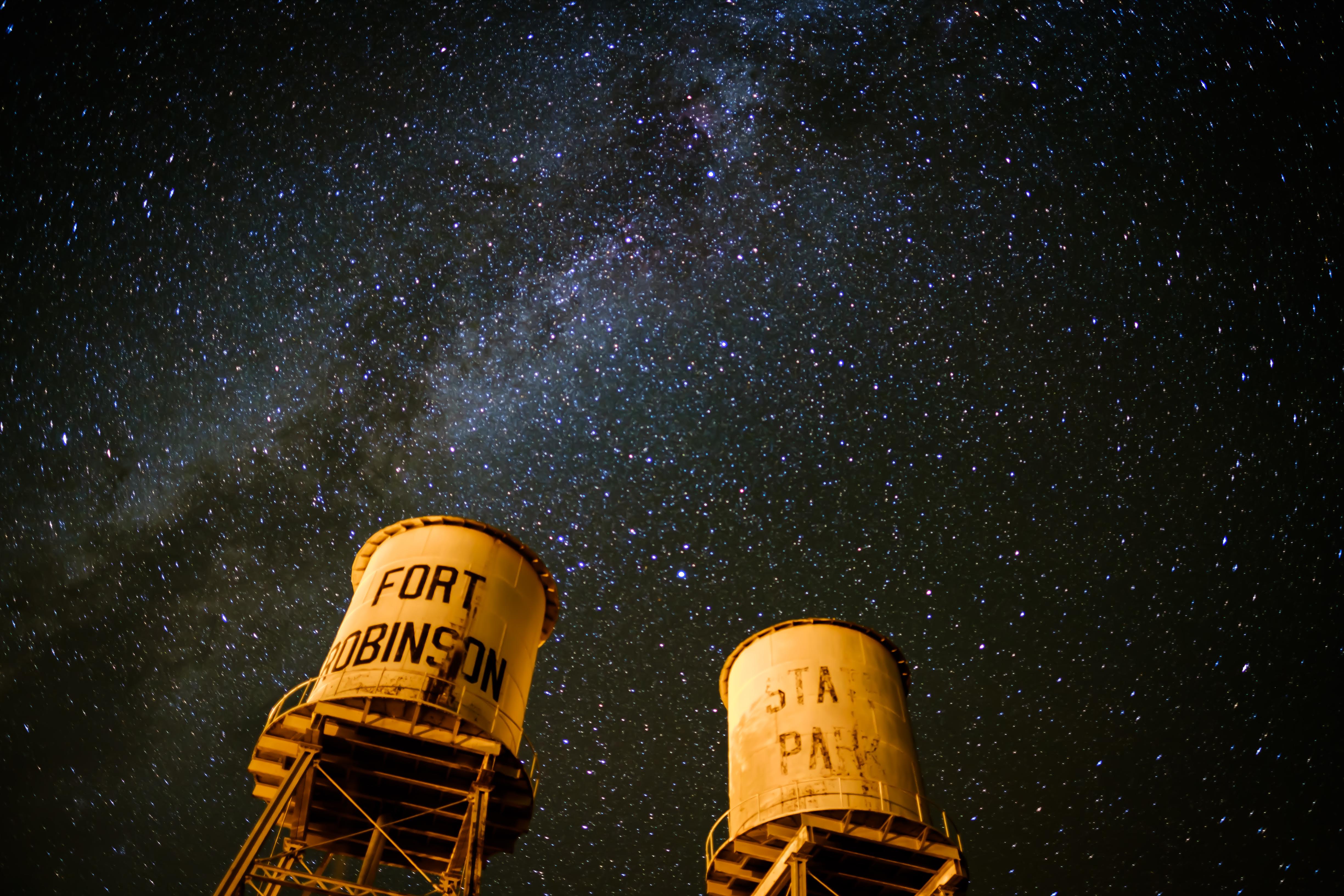 “Cather wrote similarly about the Great Plains, too,” Emily said. She was referring to the passage in My Ántonia where Cather’s protagonist, Jim Burden, describes the liveliness of the prairie around him as “motion in the landscape; in the fresh, easy-blowing morning wind, and in the earth itself, as if the shaggy grass were a sort of loose hide, and underneath it herds of wild buffalo were galloping, galloping.”

To be sure, the rich, autumnal colors, the persistent wind, and the mixed grass prairie made it all too easy for us to consider a kind of wildness throughout our trip, which took us from the Oglala National Grasslands, through the bluffs of Crawford, Neb., and up to the southwestern corner of the South Dakota Badlands. Still, much of that “wild” perception remained firmly imagination—figments of a time before the western expansion of white settlers into the region rendered the buffalo all but extinct, and transformed the fixed dunes into privately held plots of grazing cattle. 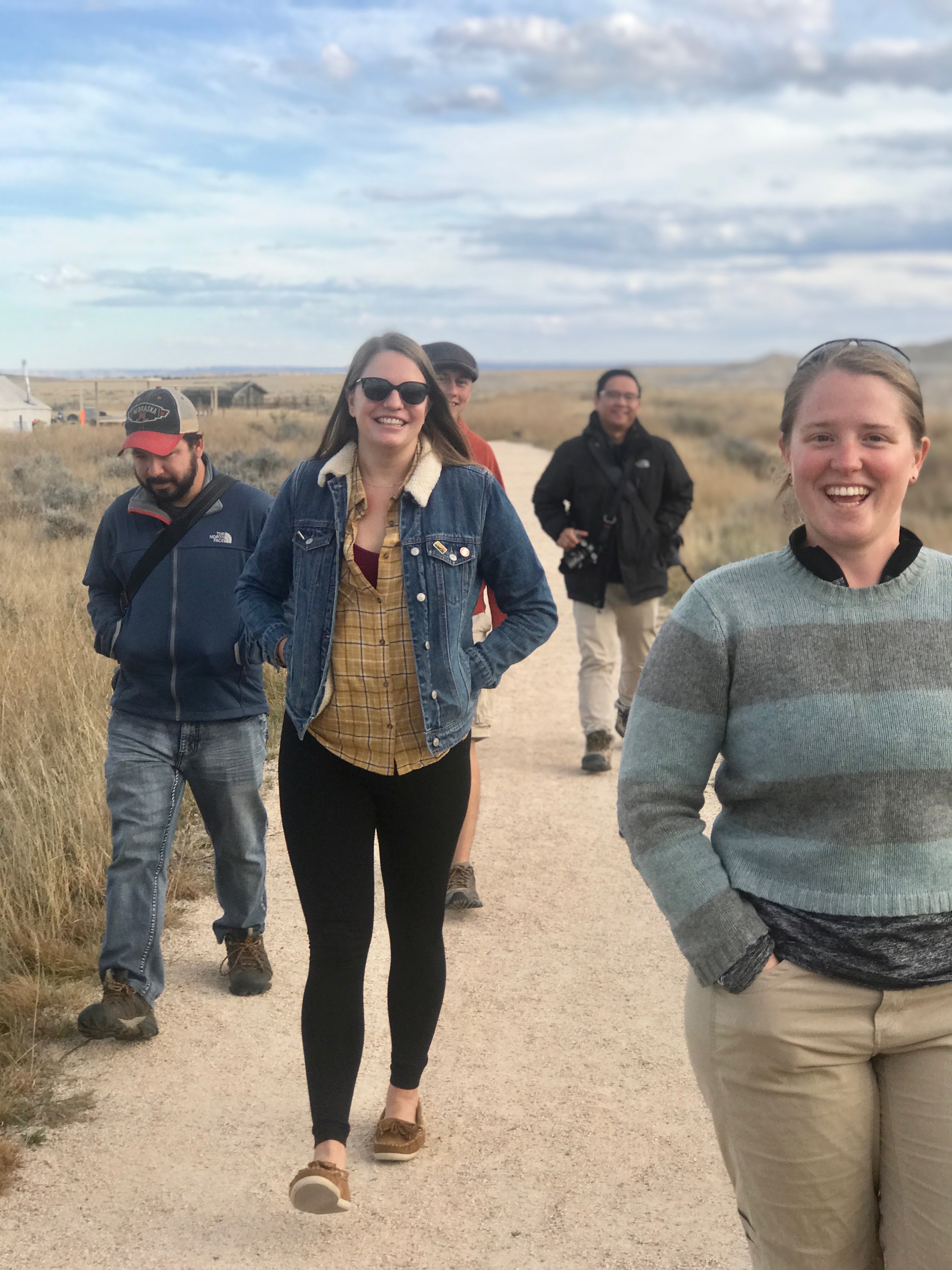 Some of the fellows, (front to back) Katharine Hogan, Emily Rau, Cory Willard, Matthew Thompson, and Chih-Chung Lee, at the entrance to Toadstool Geologic Park, photo by Cameron Steele.

Indeed, much of the retreat meditated on these tensions as the six of us—including Katharine Hogan, a doctoral student in Natural Resources/Applied Ecology, Chih-Chung Lee, a Biology Department PhD student, Matthew Thompson, a PhD student in Civil Engineering, Cory Willard, doctoral candidate in literature, Emily, and myself—spent long hours in conversation about land and ownership, preservation and loss, Native heritages and Euro-American settler colonization. 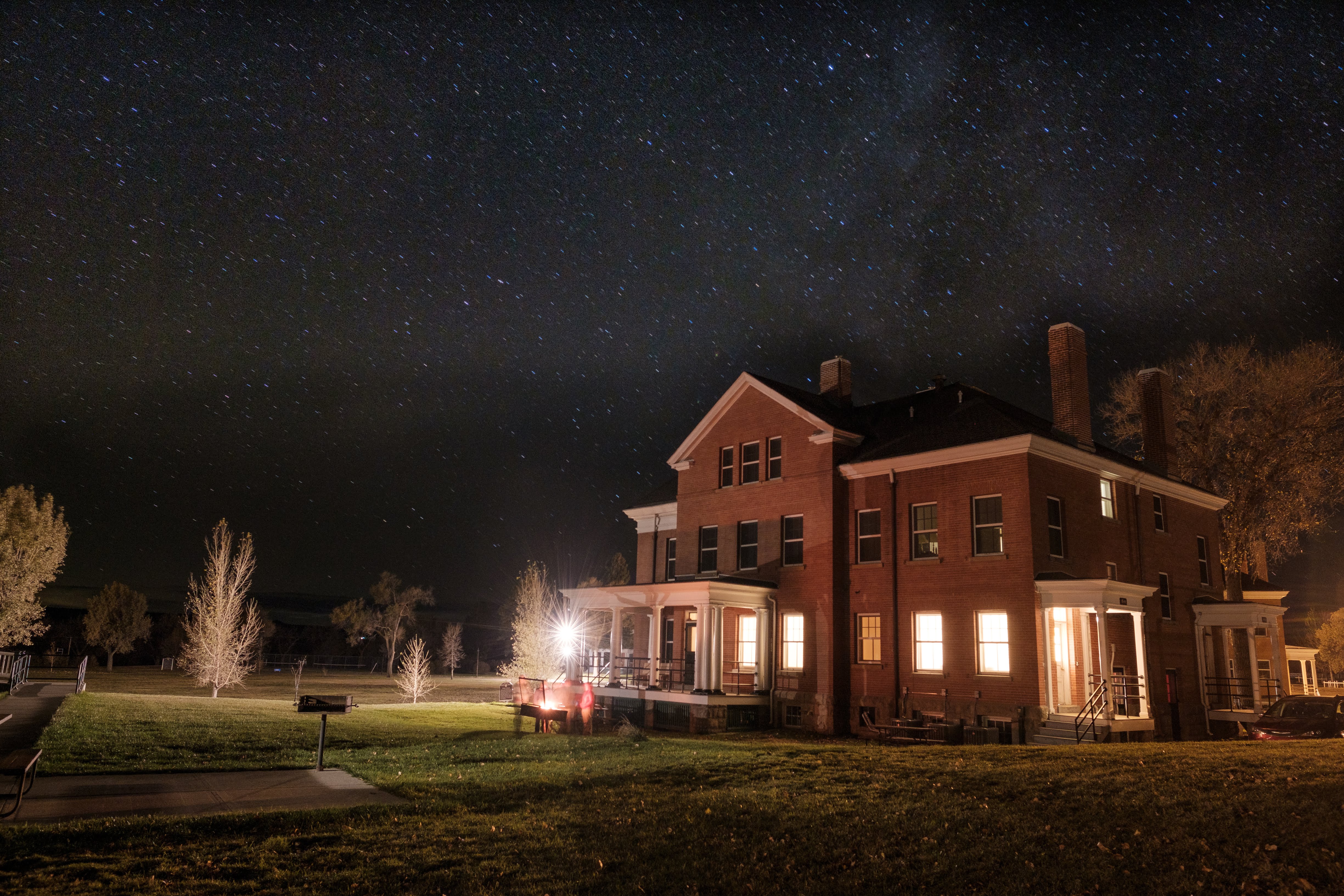 Officer’s quarters that served as our home-base at Fort Robinson State Park, photo by Chih-Chung Lee.

Over the long weekend, a wasp-inhabited former officer’s house at Fort Robinson State Park in Crawford served as a fitting homebase for us, our meandering discussions, and Emily’s home-cooked meals. A former army base established in the mid-19th century, Fort Robinson now comprises more than 22,000 acres of bluffs and pine, stream-side trails, and restored grasslands. It is also the site where U.S. soldiers imprisoned and killed Oglala Sioux Chief Crazy Horse in 1877.

While there, we enjoyed the beauty of our surroundings—from running the trails beneath the cliffs in the morning, to fly-fishing at Soldier Creek, to hiking the sedimentary hills and freshly burned prairies at nearby Toadstool Geologic Park and the Agate Fossil Beds National Monument in Harrison, Neb. We also spent time reflecting on our settler history’s sharper edges. On a cold afternoon, during a sudden, fleeting snowstorm, several of us walked to the site of Crazy Horse’s killing at Fort Robinson to pay our respects and stand in quiet witness. The next day, we drove our rental minivan two hours north, skirting the Badlands, to the Pine Ridge Reservation in South Dakota. 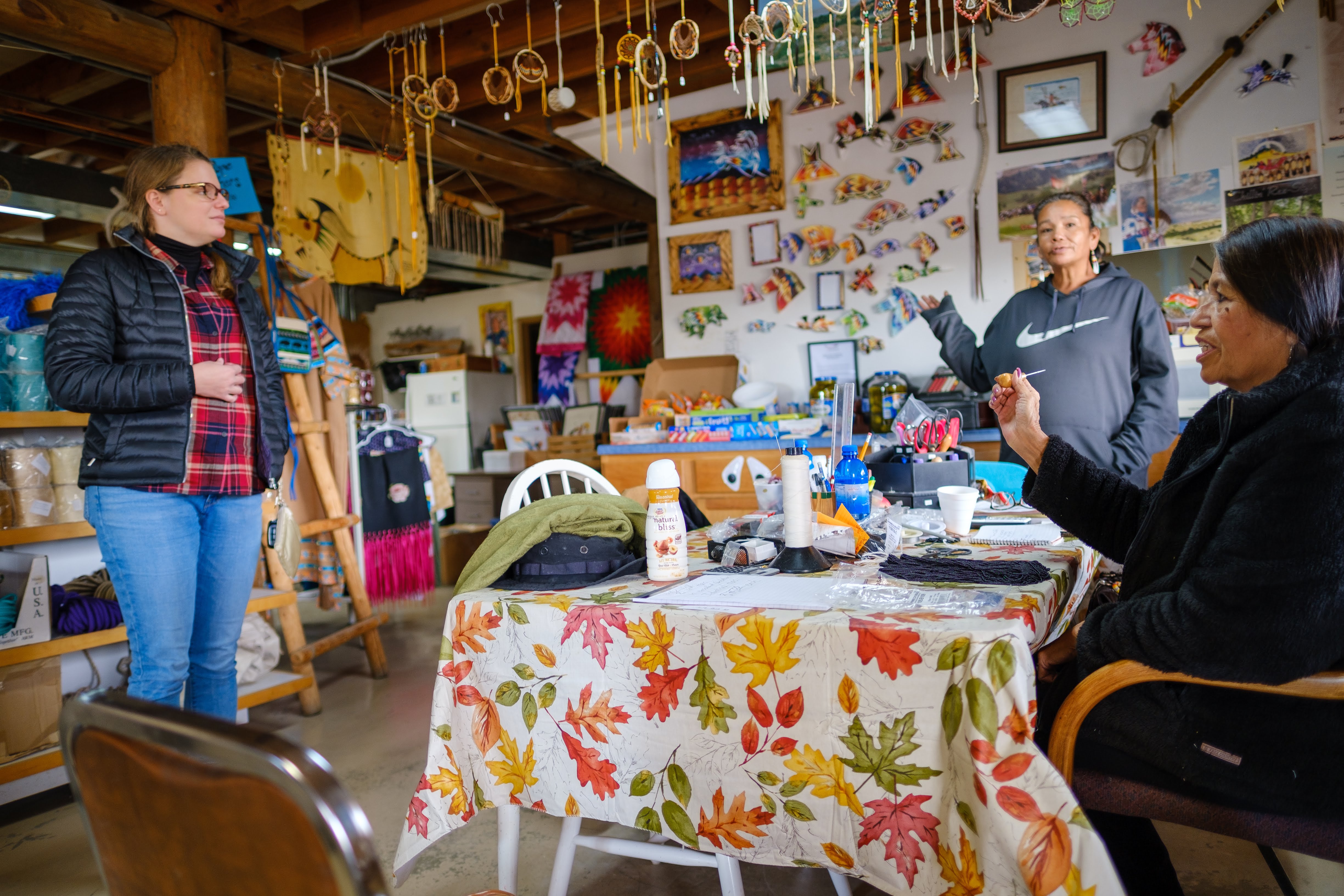 During the tour, Kate told us about how the Lakota people have learned to hide, even while preserving their culture and identity. She recalled—recalled in the sense of having a collective memory—how the U.S. military followed them for years, always setting up camps near them while they hunted buffalo. They couldn’t escape the gaze of the military, which taught them to hide their resiliency from the eyes of the U.S. government. But now, she emphasized, the Lakota are ready to fight back against the continued incursions onto their lands, bodies, identities, and fundamental rights.

Our trip ended with a drive back to our final night at Fort Robinson through a small section of the Badlands. As we crossed the pockmarked land with its steep rises and strange depressions, its protected mixed grass prairie, and all that unrelenting sky, we learned (through some passenger-seat Googling) that the Lakota were the first to call the landscape “maco sika” or “land bad” for its extreme, difficult-to-traverse conditions. And truly, if anything were impressed upon us graduate fellows during our retreat, it was the resilience of this chaotic landscape, the liveliness of it, and, undoubtedly, of the people who lived here first.

Our first stop on the tour led by Kate Thunderhawk was at the Historical Center at the Oglala Lakota College. In this center, we participated in a guided tour of the exhibit, which charts the history of the Oglala Lakota people. The exhibit included art by local artists, historical photographs, and maps, accompanied by a narrative of the history of the Oglala Lakota people from the early 1800s until the Wounded Knee Massacre in 1890. Kate indicated that she wanted to start the tour there so we could get a true sense of the history and context, and see both the historical photographs and the contemporary efforts to grapple with the legacy of that violent history, before visiting some of the sites drawn on the maps.

From here, we walked over to another exhibit space where the works of artists in residence at Oglala Lakota College were on display. Kate pointed out the construction of some new spaces for these artists to live, work, and display their art, that would be opening soon. She also talked about her own enrollment in the Lakota Studies course at the college, describing how she was learning the Lakota language. She told us later that her mother had been enrolled in the boarding school when corporal punishment was still in practice. When Kate knew her, she was still afraid to speak the Lakota language and denied knowing it, although a few times in her life Kate remembered hearing her speak it. Kate did not learn the language as a child, which is a common experience among children of boarding school survivors. She is working now to recover her native language, and told us that once she is fluent, she plans to no longer speak English and to only speak Lakota.

As we got back on the road, Kate pointed out a few businesses, small towns, other campuses of the college, and a former boarding school site before driving us past the reservation’s radio station, and turning the dial until we were listening to KILI Radio, FM 90.1. KILI Radio is an independent radio station owned and operated by the Lakota people. With this station playing, we stopped our minivan near Porcupine Butte at the site where the Lakota people surrendered before being forced to walk the five miles to Wounded Knee where the massacre occurred. Kate pointed out the distance the Miniconjou Lakota and Hunkpapa Lakota were forced to walk. As we quietly drove that same distance, Kate described how every year on the anniversary of the massacre, riders gather on horseback and make that journey in honor of all those who died.

We then arrived at the site of the Wounded Knee Massacre, and got out into the cold wind to read the account of the events of the day. A few other cars were there as well. Across the street, up on a hill, we visited the mass grave containing 146 Lakota people who died in the massacre, marked with a stone listing all the names of the deceased. A chain link fence adorned with scarves, grasses, and pieces of colored cloth surrounds the grave. On each side of this grave, relatives of the people who lost their lives have been buried, as well as people who were buried there as an honor. We read each of the names on this marker, and once again Kate pointed out the distance and described the horrific events still seared into the memories of the Lakota people. 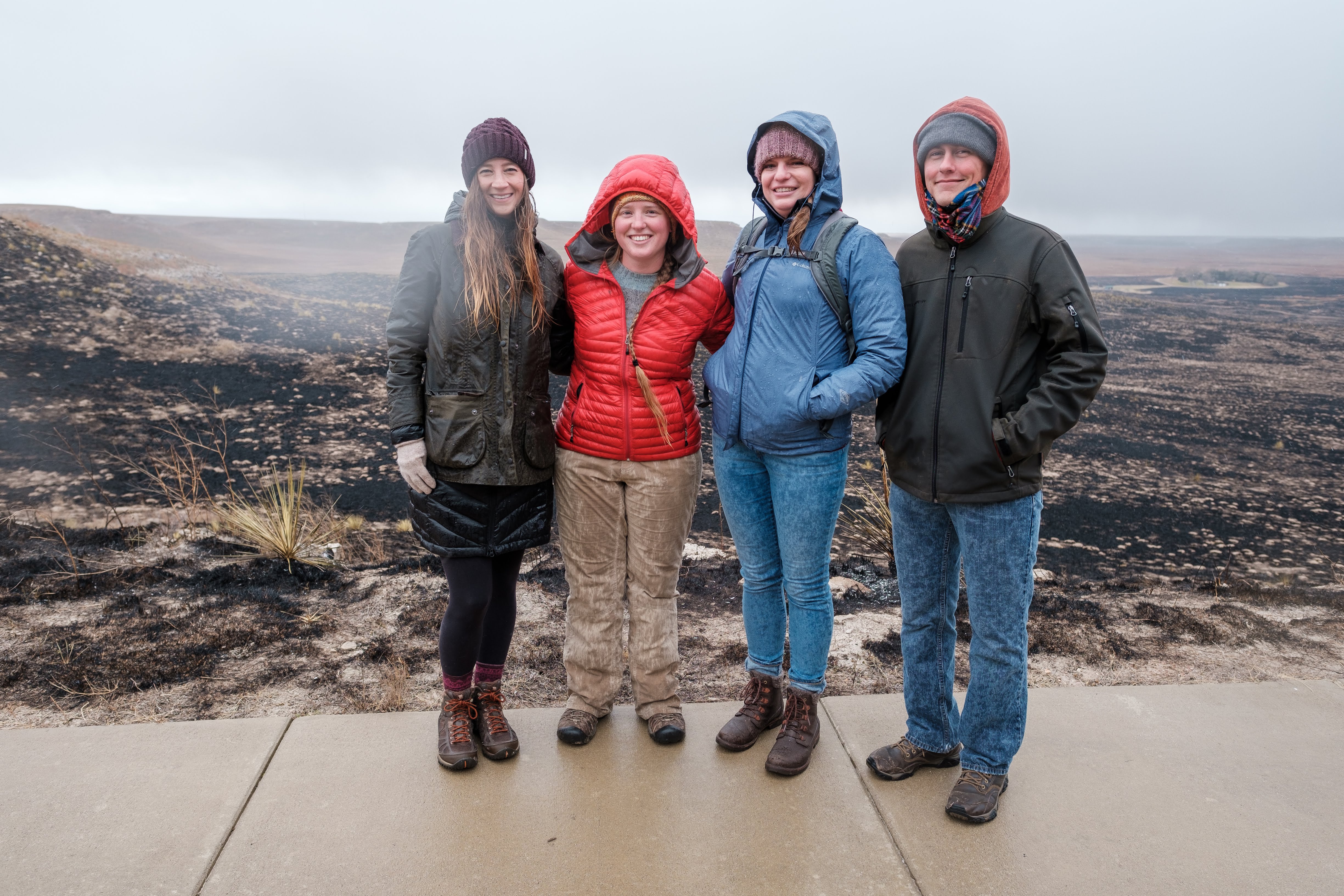 Don’t be afraid of the wasps! They are, as wasps go, rather friendly!

Ask for Rosie Freier for help arranging tours and visits.