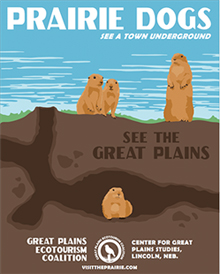 “Poisons put out by ranchers and both state and federal agencies, which over time eliminated an estimated 99 percent of the species’ total population.”

The prairie dog was once a major part of Great Plains life. Vast prairie dog “towns” stretched for miles across the open grasslands. Today, scattered populations can be found mainly in protected areas.

Prairie dog towns are either a biological oasis or a nuisance, depending on who you ask. Many wildlife species associate with prairie dogs, including the raptors and mammals that feed on them as well as those that share their habitat, like the burrowing owl. Meadowlarks, grasshopper sparrows and other birds are also found in greater numbers in prairie dog towns than in surrounding rangelands.

In the late 1800s, it is estimated that some 700 million acres of North American rangeland were inhabited by prairie dogs. But their expansive towns aren’t always compatible with agricultural interests and this tension has led to a decline of “free range” prairie dogs in much of the Great Plains. Today their range has been reduced to 90 to 95 of historic levels, according to Nebraska Game and Parks.

There are still chances for the public to see prairie dog towns and imagine the expansive towns that once stretched for thousands of acres. 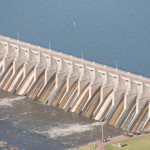 Harland County Reservoir is a great place to see several active prairie dog towns. The U.S. Army Corps of Engineers maintains a family-friendly viewing site with parking and educational signage on Corps Road A between Republican City and the Harlan County Dam. Another public viewing site it just off Corps Road B, between Alma and the entrance to Methodist Cove. Both sites are very close to Harlan County Lake, Nebraska’s second largest lake, which is a great spot for camping, fishing, hiking, hunting and general enjoyment of the outdoors. 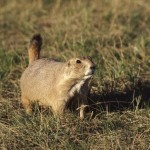 Bison, elk, and other wildlife roam the rolling prairie grasslands and forested hillsides of one of America’s oldest national parks. Below the remnant island of intact prairie sits Wind Cave, one of the longest and most complex caves in the world. 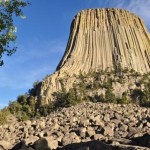 An astounding geologic feature that protrudes out of the rolling prairie surrounding the Black Hills. This site is considered Sacred to the Lakota and other tribes that have a connection to the area.

Prairie dogs are a keystone species in the Badlands; that is, their presence is critical to the overall ecological community of the mixed-grass prairie. 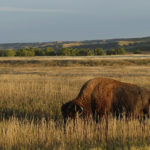 American Prairie Reserve is a unique effort to build a nature reserve to conserve and restore the grasslands of Montana. The reserve is home to bison, prairie dogs, swift fox, many grassland bird species, and more species. The collaboration through state and federal agencies, ranching operations, and scientists is a great example of a multi-pronged approach to conservation. When complete, American Prairie Reserve will span more than three million acres of private and public land, showcasing the iconic landscape that once dominated central North America and helped shape our national character. 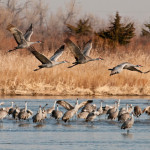 Rowe Sanctuary is dedicated to the conservation of sandhill cranes, whooping cranes and other migratory birds and their habitat along the Platte River. Along with preserving habitat for wildlife, Audubon’s visitor center in south central Nebraska is a home-base for crane tourism and year-round nature-based education opportunities. Along with birds, the area also features several mammal species including prairie dogs, shrews, woodchucks, gophers, coyote, swift fox, otter, and bobcat. 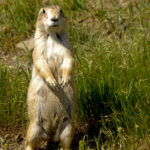 Greycliff Prairie Dog Town State Park is located in southeast Montana. The site is 98 acres in size and is situated at 3,600 feet in elevation. This black-tailed prairie dog community is protected and preserved through the Nature Conservancy, the Montana Departments of Transportation and Fish, Wildlife and Parks. 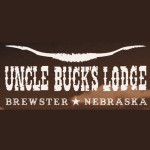 Experience the diverse ecosystem of the Sandhills grasslands, which supports a distinct population of plants and animals. Fields are filled with grasses and wildflowers, cacti and other desert plants, and lush marshes that buzz with birds, mammals, reptiles, amphibians and insects. Researchers have counted 134 different vertebrate species associated with a community of prairie dogs alone. 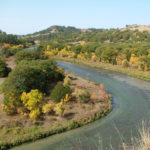 Fort Niobrara NWR strives to preserve, restore, and enhance the exceptional diversity of native flora and fauna and significant historic resources of the Niobrara River Valley and Sandhills of Nebraska. In the refuge, visitors can see bison, prairie chickens, elk, waterfalls, and boreal forest areas. 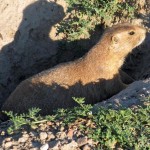 When Theodore Roosevelt came to Dakota Territory to hunt bison in 1883, he was a skinny, young, spectacled dude from New York. He could not have imagined how his adventure in this remote and unfamiliar place would forever alter the course of the nation. The rugged landscape and strenuous life that TR experienced here would help shape a conservation policy that we still benefit from today. Many iconic animals are found in the park including bison, elk, prairie dogs, and feral horses.

Know of an ecotourist-friendly place in the Great Plains to see prairie dogs? Email us at cgps@unl.edu